The memorial is conceived as the BLACK SHED – a symbol for the woodshed underneath which, in a bunker, people were hidden. The appearance of the building has been borrowed from the tarred sheds of the Ķīpsala fishermen and sailors, sheds that were built of floated logs with their characteristic color and smell. Conceptually and visually, the shape of the museum evokes Noah’s Ark or an overturned boat, which too could be considered as a shelter of life.

The Lipke Memorial is the expression of a very clear and purified idea, a very ascetic and laconic project. It affects all the senses: vision, hearing, the olfactory sense.  The inside of the shed is a labyrinth through which one searches for the concealed pit. The visitor is emotionally guided along the perimeter of the shed, then he climbs to the attic and comes to the hatch through which the bunker at the bottom of the cellar can be seen. The bunker is 3×3 m, has wooden bunks and matches the historical bunker. The space in the attic is the main exhibition hall of the museum with a visually open roof through which sunrays penetrate at dusk from the coveted outside world – from freedom.

On the first floor of the building, around the pit, there is another passage and a sukkah built above the pit – the symbolic divine temporary shelter from the rough and cruel world, the longed for house with its painted walls. The visitor can only look into it through windows. The entrance to the shed is at one end and the exit at the other end. Only upon exiting the shed, does the visitor finally see it from the outside and can appreciate its size in the middle of a quiet and intimate Ķīpsala orchard with its old apple-trees. The contrast between the dark labyrinth inside and the sharp outside light turns one away from the meditative trance of the voyage and back to the reality of today. In contrast to other famous Jewish museums, the central concept and basic idea of this Memorial are only somewhat based on the authenticity of the place and the concrete testimonies and memories of escape. Philosophically, using the vocabulary of architecture, the Memorial is conceived as a symbolic voyage of man through dim passages to light, freedom and faith in human values at a time of grave peril and helplessness. 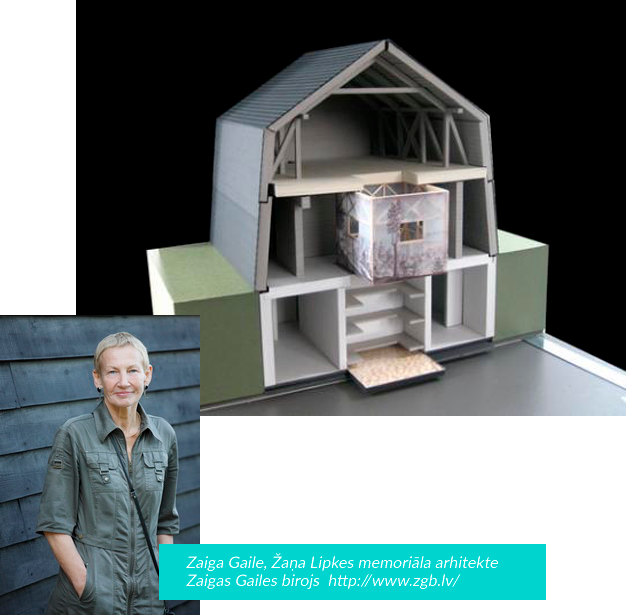